How will the talents of tomorrow work?

They are about to draw their pensions, the baby boomers. Are you one of them – in other words were you born somewhere round about the sixties? 1.3 million people are going to swap their office chairs for the driving seat of a camper van or their sun lounger. So who will step up to design tomorrow’s workplace?

We’ve taken a closer look at Generation Z, in other words the people who were born between 1999 and 2019 into the digital world, along with their desires and expectations, and compared these results with responses from corporate decision-makers. The outcome is a fact book, which companies can use as a guide if they want to rank amongst the winners in the War for Talents. Here are the key findings.

Methods used in the study

A significant proportion of the findings originate from two surveys on the subject of “Digital working environments”, developed by the Handelsblatt Research Institute (HRI) on behalf of König + Neurath. It was conducted by YouGov Deutschland GmbH and GESS Phone & Field Marktforschung GmbH.

In the first survey around 1000 schoolchildren and students aged 16 to 30 were questioned via an online questionnaire. In other words precisely the people who are going to be the future workforce in the new working environments. The results were weighted and are representative of the population with regard to age and gender in Germany.

As well as that, in a second survey around 100 senior managers or HR directors in companies with 300 or more employees were interviewed over the phone.

Both surveys involved the same theme areas. This included employer attractiveness and the actual workplace itself, as well as the transformation of working environments, organisation and culture.

In our study we highlighted many different aspects of working life. Initially we focused on the employment market as a whole from a macroperspective, and then we took a closer look at the expectations of Generations X, Y and Z, with questions about employer attractiveness, workplace design preferences and work organisation. Who will be working where in future and what will this work look like? Here are a few answers to these questions:

Who are Generation Z?

After the millennials with their birthday around the turn of the millennium, Generation Z is now gradually capturing the employment market (born 1999 onwards). They feel at home in the digital and networked world, laptops and mobile phones are part of their everyday routine. In Germany around 10 per cent of the population belong to Generation Z.

Working conditions – a key factor for everyone

Employees who rate working conditions as very good also rate overall satisfaction with their employer as above average, with 98.3 per cent happy to recommend.

What makes an employer attractive?

What do companies consider important? What do employees want? Security is the top priority for the employees of tomorrow. For 91 per cent of them a company is attractive if it offers employees a secure job (schoolchildren and students aged 16 to 30 were questioned). However from an employer perspective the proportion of companies in which they view job security as an essential feature of their attractiveness to potential employees is somewhat lower, at 77 per cent. A positive image is more important to them. There is more agreement with regard to the importance of development and training opportunities. 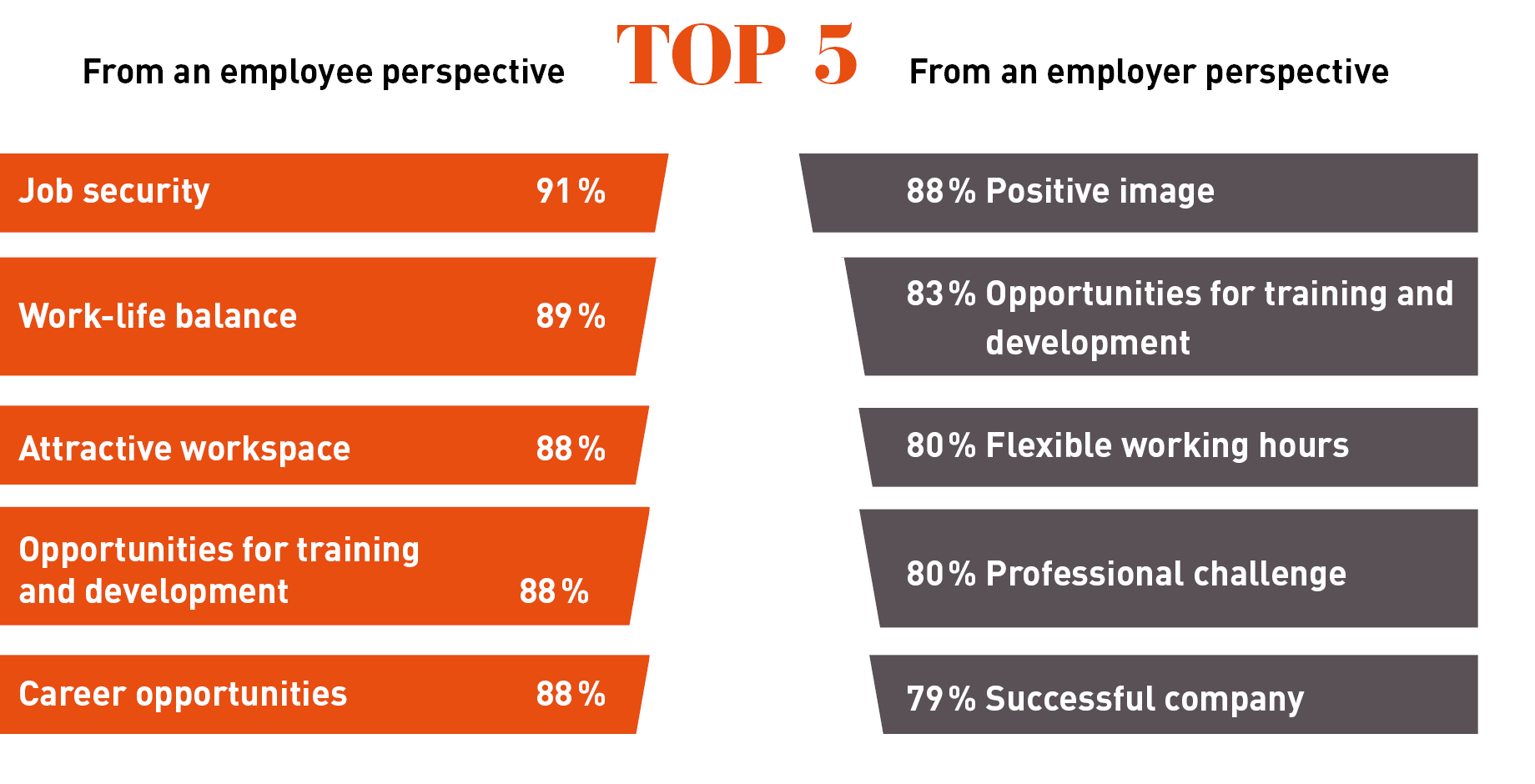 Further exciting results: from the perspective of future employees, attractive employers also facilitate a good work-life balance. The highest possible salary on the other hand is “only” important to 82 per cent of employees.

A surprising result: “People who occupy different workspaces throughout the working day – so as well as sitting at a desk they also use lounges, kitchen areas or an outdoor facility – are significantly better informed than people who stay in the same place. Furthermore they develop significantly more ideas and solutions.”

A lack of movement and staring at a digital gadget is a health risk factor for the younger generation too – although awareness of this is not as clearly apparent yet. The fact is that days of absence due to ill health per employee has started to increase again in recent years, with the figure for 2018 standing at 10.6 per cent.

Promoting employee health starts with the furniture for most employers. Around three-quarters of companies surveyed have furniture in their premises that supports health – for instance height adjustable desks. It might be due to their young age that “only” around two-thirds of prospective employees view this as an important aspect of a workspace.

A flexible working day, independent working approaches – our study results originate from a time before the COVID 19 pandemic. However even at this point the trend of working from home was clearly beginning to emerge.

Changing work structures is an ongoing process. On a scale that has full compatibility of job and private life at one end and the corporate goal of being better, more efficient and more innovative than competitors at the other, these extremes are moving towards each other. The pandemic also contributed to this.

How do people work together?

Both employers and employees are convinced that cooperation in future will be more heavily influenced by digital alternatives. 82 per cent of tomorrow’s employees think that the workforce of the future will take an even more virtual and networked approach to cooperation. This perception is shared by more than four fifths of companies.

There is huge potential in the design of work structures, the workspace and wider premises. Taking the needs of younger generations seriously, aligning them with the company’s work culture and goals to find solutions – this can be transformed into a key factor for success when it comes to attracting the best people for the job. We can help you create innovative working environments that allow scope for change.

other ideas are based on this article: